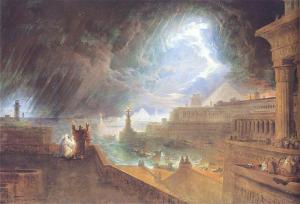 The mighty wonders of our Lord must ne’er forgotten be
So listen closely to these stories from our history
We must not keep the lessons learned from these who come behind
The Lord commanded us to teach them, of His laws remind.

If we are faithful to the task and speak to them the truth
Perhaps, then, they will carry on and share them with their youth
In each new generation born there’s need for stories told
Our children cannot hope or trust if these things we withhold.

We must be honest as we share the things our forebears did
Or they won’t give their hearts to God but do what He forbids
So many times the Lord declared that they must not forget
But stubborn, selfish, rebels always end up with regrets.

The war·ri·ors of E·phra·im, well-armed for battle, fled
They turned their backs and wouldn’t walk in what their God had said
In time of crisis they forgot the wonders God had done
The miracles He had performed and battles He had won.

If only they had called to mind the time He split the Sea
And rocks were split to give them drink by His divine decree
He led His people in the cloud, at night the fire glowed
His mighty hand protected them, deliverance bestowed.

But, no, they put God to the test and doubted that He cared
Denying that the Lord Most High a table had prepared
“Oh, sure,” they said, “He struck the rock and waters He made flow
But what about some bread and meat, we need real food, you know?”

He heard the people murmuring, His anger rose up high
He gave them lots of bread and meat and then caused some to die
He gave them what their heart’s desired and they ate angel’s bread
But still refusing to believe, they chose to sin instead.

When life got really hard for them they finally sought God
Their lips declared Him as their Rock but it was all a fraud
They lied and did not want His ways, His covenant denied
Over and o’er they turned aside, God’s patience sorely tried.

Yet in His mercy He forgave and didn’t wipe them out
Remembering that they were dust, He put up with their doubt
So often in the wilderness they grieved His father-heart
Why would they not recall the past and from their sin depart.

He saw their troubled life as slaves in Egypt long ago
With ten dread plagues He set them free, His mighty pow’r did show
Rivers and streams were turned to blood and flies were everywhere
The frogs and locusts took their turn and hailstones caused despair.

Then, finally, the cup was full, destroying angels sent
In each Egyptian home that night, much wailing and lament
The firstborn son, the flow’r of youth, throughout th’ entire land
Had felt the mightiest force of all, the Lord’s all-pow’rful hand.

But His own people, like a flock of sheep were led away
He brought them to the Promised Land where they could safely stay
But unbelief was in their blood, they could not faithful stay
They worshiped idols, raised up shrines, their hearts had gone astray.

So God again rejected them, His glory from Shiloh gone
The ark was captured, swords consumed, God’s blessing was withdrawn
Young men and women slaughtered long before their nuptial songs
The priests and people also killed in judgment for their wrongs.

But then the Lord awoke from sleep and drove the foes away
And settled on Mt. Zion as the place where He would stay
On Judah’s heights His Temple built, a solid dwelling-place
The object of His special love where we could seek His face.

Then to the sheepfolds He did go, a shepherd there to seek
He wanted one who cared for those who wandered or were weak
His servant David He did choose to lead His chosen race
With skillful hand and honest heart he shepherded with grace.