SCENE 1 – The Lamb is Center Stage 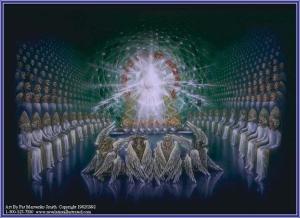 After that I saw an open door leading into Heaven and I heard that trumpet-like Voice again, this time saying, “Come up here so I can show you what will happen next.”

Instantly I was in the Spirit and looking at a marvelous throne. But what really caught my attention was the One sitting on the throne! How can I describe the scene?

Four unusual creatures were hovering about the throne, each with six wings and with eyes on all sides of their bodies:

Day and night these creatures declare, “Holy, holy, holy is the Lord God, the Almighty, Who was and Who is and Who is to come.”

As they express this tribute to the One sitting on the throne, the twenty-four elders bow down before Him, lay their crowns at His feet, and add to the chorus of worship, saying, “You are worthy, O Lord! All glory, honor, and authority belongs to You because You created all things and everything exists for Your pleasure.”

Then I noticed that the One seated on the throne held a scroll in His right hand. It had writing on both sides but was sealed up with seven seals.

A mighty angel boomed out, “Who is worthy to open the scroll and break the seals?”

But there was no one in heaven or on earth who qualified even to look into it. I began to weep over this until one of the elders said, “Wait! Stop your tears. Look, the Lion of the tribe of Judah, the Root of David, has overcome. He has authority to break the seals and open the scroll.”

That’s when I saw Him approach the throne — a Lamb, One that had obviously been sacrificed. He had seven horns and seven eyes which are the seven Spirits of God sent out into the whole earth. He came and took the scroll from the right hand of the One who sat on the throne.

As He took the scroll, the four creatures along with the twenty-four elders fell down before the Lamb. They each had a harp and golden bowls full of smoking incense, which are the prayers of the saints. Then they began singing this new song:

“You are worthy to take the scroll and to break its seals, for You were slain.  With Your blood You have purchased for Your God men from every tribe and tongue and people and nation. You have made them kings and priests to minister to God, and they will reign upon the earth.”

Joining them was the voice of countless angels, myriads of myriads and thousands of thousands. Together with the creatures and the elders, they said with a loud voice,

“Worthy is the Lamb that was slain to receive authority, riches, wisdom, strength, honor, glory, and blessing!”

Then I heard every creature in heaven, on earth, under the earth, and on the sea, every living thing everywhere, saying,

“To Him who sits on the throne and to the Lamb, be blessing and honor and glory and dominion forever and ever.”

The four living creatures kept saying, “Amen!” And the elders fell down and worshiped.