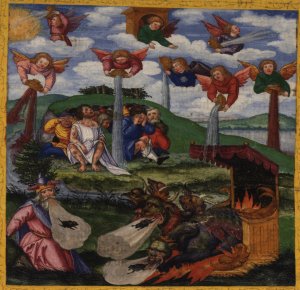 After that I saw the Temple in Heaven thrown open wide.  Seven angels came out dressed in dazzling linen with gleaming golden sashes:

Then I heard a loud voice from the Temple commanding the angels, “Go! Pour out over the earth the seven bowls of the wrath of God!”

When the first angel poured out his bowl, everyone on earth who had the mark of the beast and worshipped the statue broke out in painful, malignant sores.

The second angel poured his bowl into the sea, which turned the water into a deadly fluid like the blood of a corpse. Everything in the water died.

The third angel emptied his bowl into the rivers and springs, and they all turned to blood.

Then I heard the angel of the waters say, “You are right and just in this, O Lord, Who is and Who was and Who is to come. They have shed the innocent blood of saints and prophets, so You have given them blood to drink. They are reaping what is due them.”

The altar called out in agreement, “Amen, Lord God Almighty, Your judgments are true and right!”

When the fourth angel poured out his bowl on the sun, it became intensely hot so that men were burned by its heat. They cursed God for bringing this on them, but they would not repent or give Him respect.

Then the fifth angel emptied his bowl on the throne of the beast, and its entire kingdom was plunged into darkness. The people gnawed their tongues because of all the pain they were going through, and they cursed the God of Heaven but refused to repent of all they had done against Him.

The sixth angel poured out his bowl into the great Euphrates River. It instantly dried up and became a highway for the kings of the east.

Next, I saw three demon-spirits appearing as frogs, coming out of the mouths of the dragon, the beast, and the false prophet. They were able to do supernatural feats and convince the kings of the world to join together against God Almighty in the great battle. They gathered in the place called Armageddon.

“Watch! Be ready!
I will come as unexpectedly as a thief.
Happy are those who stay awake
and have their robes ready
so they won’t be caught naked
and ashamed.”

When the seventh angel poured his bowl into the air, a loud voice came out of the Temple from the Throne, saying, “The end has come!”