What an unusual way to end a “book” — especially since we know from other historical resources what happened next.  Why this sudden “The End” in the middle of a page-turner about first-century world-changers?  Aha!  Maybe it wasn’t intended to be The End.  What we call The Book of Acts or The Acts of the Apostles was really never given an inspired title.  If Part One of the Trilogy (The Jesus’ Story) was God presenting His plan and solution for bringing about the perfect Kingdom of God, then Part Two (The Sequel) is the ongoing story of how the plan is taking shape in our lifetime(s). Just maybe the Author wanted to pull the reader into the action in such a way that by the time they reached yesterday’s blog, they’ve become part of the story themselves! I hope you’re “in.”

Working through the complex images and metaphors of Revelation, my brain felt rather like a pretzel, all twisted and randomly connected . . . or not.  But I just kept pushing forward, trying to visualize the scenes and organize the drama.  It wasn’t until I was finished with it that I realized the best way (at least at first) to take in The Finale is to experience it like a high-tech, Imax theatre production.  What do I mean?  When you go to a theatre to watch a cinematic thriller, you don’t get a remote control to pause the presentation every time there’s a character or plot twist you don’t understand.  No, you simply have to sit still and let the show go on from beginning to end.  After all, the director of the project mainly wants you to come away so gripped with the overall impact that you have to go back time and again to fit the pieces together.  That’s what you need to do with this complex little “thriller.”  Read it through.  Ask the Director what He mainly wants you to get from it first time through.  And now, buckle your seatbelts, The Finale is about to begin! 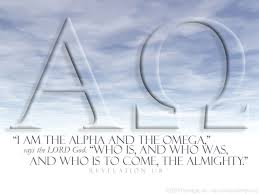 This is God’s revelation of things to come, the Word from God regarding Jesus Christ. This Message was delivered to God’s bond-slave, John, by the Angel of the Lord.

A special blessing is promised to all who read these words, listen to them, and keep them. The time of fulfillment is very near.

I, John, am particularly addressing this to the seven Churches in Asia.

Grace to you and peace from Him

and from Jesus Christ

Glory and never-ending dominion belong to Him who loves us

Look! He is coming through the clouds! Every eye will see Him, even those who pierced Him. The sight will bring every tribe on earth to its knees in bitter grief. Amen!

“I am the Beginning (Alpha) and the End (Omega),” declares the Lord God,
“Who is, Who was, and Who is to come,
the Supreme Almighty.”

This Word came to me when I was exiled on Patmos for declaring God’s Word and telling people about Jesus. We are brothers in Him, and in Him we share in suffering for the Kingdom and in patiently enduring all the difficulties we face, just as Jesus our Messiah did.