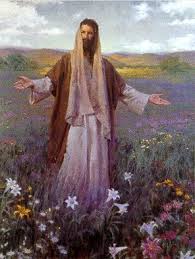 Then Jesus went out to speak to the crowds of people who had gathered. Directing His comments to the disciples, He said, “Be careful that the teachings of the Pharisees don’t contaminate your minds. They think they can hide their private lives, but I’m telling you that everything will one day be out in the open — excruciatingly public!

“Don’t be manipulated by their threats. Even if they kill your body, they can’t destroy your soul. Live your life before God who has power over body and soul! Know that He cares deeply about you, keeping track of the littlest details like the number of hairs on your head. Why, He’s aware of every sparrow, and you’re worth far more to Him than they are.

“Don’t be ashamed to identify with Me here on earth, and I’ll be proud to introduce you to the angels of God in heaven. But if you turn your back on Me, I’ll have to do the same.

“Know, too, that if someone misjudges or speaks against Me, they can be forgiven.  But if they assign the work of the Spirit to Beelzebub, they cannot be forgiven.

“You shouldn’t concern yourselves about how to respond when the authorities interrogate you.  The Holy Spirit will put the words in your mouth at just the right moment.”

While Jesus was giving these profound warnings and instructions, someone in the crowd thought they might get Him to help arbitrate a family feud they were having over inheritance monies. “Teacher, would you tell my brother to divide the inheritance with me?” the man asked.

Jesus answered him by saying, “Excuse Me, but since when have I been assigned to handle your case?”

That ended the conversation, but Jesus used the opportunity to talk about the dangers inherent in possessions. “Guard yourselves against the tyranny of covetousness,” He said, “because you know that a good life isn’t defined by the number of things you own.

“Have you heard the story about the wealthy businessman who prided himself in how successful his investments had become? ‘Why, I think I’ll just tear down these little warehouses and built some huge ones that can handle all that I’m accruing!’ he boasted. Then he said to himself, ‘Buddy, you’re in great shape! Take it easy now; you’re set for life! Let’s party!’

“What he failed to consider in all this was what God might have in mind. ‘You’re a fool,’ God said, ‘tonight you will die and then what good will all this do you? Who will benefit from all your stuff?’

“This is the situation for everyone who bases their entire life on what they can get here and now but doesn’t value what God considers riches,” Jesus explained.

“So that’s why I urge you not to stress out about the everyday things of food and clothing. Life is much more than food, and there’s more to the body than what you put on it. Besides, just look at the ravens.  They don’t spend their lives stockpiling food; God provides for them what they need every day.  You’re a lot more precious to Him than those birds.

“Who has ever been able to extend his life one minute by worrying over it? If you can’t do something as simple as that, how do you expect to control the bigger issues?

“Discouraged about your limited wardrobe? Why? Look at the lilies in that field.  They are so stunning that not even Solomon in all his finery was as beautiful as they are, but those plants are going to be dead and gone in a few days. How much more do you think your Heavenly Father is concerned about addressing your needs than He is about those flowers?

“No, you don’t need to fret over all those details. The pagan world doesn’t know any better, but you do. You have a Father who knows just what you need. So concern yourself with the things that matter to Him and He’ll take care of the rest.

“Do you realize what I’m saying, little flock? Your wonderful Father is excited about giving you His kingdom! Don’t sell yourselves short. Sell your surplus, give away as much as you can to the poor, and start depositing real assets in your heavenly account where it is safe and sound. Once you put your treasure in what has eternal value, you’ll find that your heart’s desires will be more and more centered around things that really matter.

“But don’t let this Kingdom-of-Heaven-centered living make you complacent about life on earth. You have a job to do here. Serve faithfully in the little things, always aware that your Master will be returning. You never know when it will be; but let Him catch you doing the right thing, always ready for Him to show up.”

Peter, wondering whether Jesus meant this instruction exclusively for His faithful disciples or for the crowd, asked, “Lord, this story You’re telling, is it for us or for everyone?”

Jesus explained how the Day of Reckoning will work: “Suppose a master appoints one of his stewards to oversee the day-to-day affairs of the household. If, upon returning to his estate, that master finds that his steward has faithfully fulfilled his duties, he will be rewarded with even greater responsibilities and privileges.  But if the servant, instead of caring for the workers as the master would have, mistreats them and spends his days in drunken parties, what do you think will happen when the master suddenly shows up? It won’t be a pretty sight.

“Now, as to your question about the crowds. If this servant didn’t know what his master expected from him, then his punishment would be less severe than if he knew the master and was well-aware of what his job assignment was. In other words, if you’ve been given much, you’ll be accountable for much.

“Mind you, I am going to light a fire someday that will purify this earth. But first I must go through a fiery trial Myself, which I wish was over with. I’m not here to smooth things over but to expose and distinguish right from wrong even though it may break up families and cause division.”

Turning to the crowd, Jesus said, “You’re so good at predicting tomorrow’s weather by reading the signs, but you’re blind to the signs of the times in which you’re living. If you realized what was coming, you’d get busy making things right. Instead you’re carelessly going on with life like a wrongdoer who, instead of confessing and working things out quickly with his adversary, waits to show up in court and ends up ‘getting the book thrown at him.’”

Jesus used a couple of recent tragedies to emphasize His point. “You’ve heard about the Galileans who were murdered by Pilate while bringing their offerings to the Temple the other day. Do you suppose this happened to them instead of someone else because they were worse sinners? Of course not. Things like that happen suddenly and randomly whether or not we expect them. That’s why I’m telling you to repent and make things right while you still have a chance.  Tomorrow something like this could happen to you and it would be too late to change.

“The same goes for the eighteen unfortunate souls lost when the tower in Siloam collapsed recently. They had no idea their lives would be cut short.  Likewise you have no control over when it could happen to you. Repent, get serious about what matters most!

“A certain man had a fig tree planted. Year after year came, hoping for a harvest. Finally, he instructed the workers to cut it down, saying, ‘Look, for the last three years I’ve been expecting some fruit to show up on this tree and it produces nothing. It’s a waste of valuable space. Cut it down so we can plant something in its place.’

“The worker asked if he might not give it one more year, saying, ‘Sir, let me work the soil and fertilize it just one more year.  If there’s still nothing, then we’ll cut it down.’”