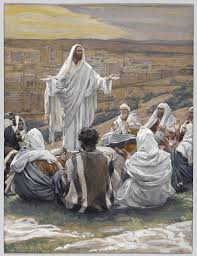 One day after Jesus had been praying, His disciples asked if He would teach them how to pray. He was more than willing and reiterated what He had taught at the beginning of His public ministry before many of them had joined Him.  Here is how you should pray:

“Our Heavenly Father, may Your Name be honored in my life,
may You be in charge of my life and may Your heart’s desire be accomplished here on earth the way it is in heaven.
We recognize You as our Source and ask only for what we need for this day.
We know we need Your forgiveness and we extend that forgiveness to all who wrong us.
Finally, protect us from the evil one and his temptations.”

Jesus went on to describe His Father’s heart and how they should ask Him for what they need.

“Suppose you are in a situation where someone drops in on you unexpectedly when you have no food in the house and the stores are closed. Even though it is quite late, you have a neighbor who you know would help you.  So you go to his house and arouse him. At first he calls down to explain that everyone is in bed and he can’t help you. You stand there and keep appealing to his kindness. Eventually, if not because you’re a friend, he’ll get you what you need just so he can get back to bed.

“When you pray, ask and keep asking until you receive. Seek for what you need and don’t stop until you find it. Knock and keep knocking until doors are opened.

“You, even though you’re sinful humans, don’t ignore the requests of your friends or children nor do you give them things they don’t need. If you know how to give good gifts to your children, how much more willingly do you think your heavenly Father will give His Holy Spirit to all who ask Him?”

In Judea He encountered many of the same situations He’d seen in Galilee. Once for instance, He cast a demon out of a man who had been made mute by the evil spirit. Immediately the man was able to speak.  The crowd was in awe. But as usual, there were skeptics in the group who explained that Jesus was possessed by Beelzebub, prince of demons, who enabled Him to cast them out.

“I know what you’re thinking, but really, think about this: if a kingdom is divided against itself, how can it keep going? What good would it do for Satan to cast out those doing his dirty work?

“And another thing, if the only way I’m able to cast out these spirits is by the power of Beelzebub, how is it that your own sons perform exorcisms? What would they say about this accusation?

“If, however, I’m empowered by God’s hand to cast out demons, then the Kingdom of God has come upon you here and now.

“If a well-armed man guards his estate, everything is safe until an even stronger man overpowers him. In that case the stronger man can strip him of his weapons and take everything he owns.

“Whoever is not actively on My side is working against Me; and if you’re not helping you’re making things worse.

“And one more thing, it’s not enough just to get rid of a demon; because if nothing better replaces it and the person’s soul remains empty, it will to return with even more wicked spirits to take possession. In that case, the man’s condition is far worse than it was originally with just one demon.”

About this time a woman in the crowd, overcome with all that Jesus was doing and saying, shouted out, “How blessed and proud must Your mother be!”

Jesus heard her and said, “An even greater blessing rests upon all who hear what God is saying and live by it!”

Crowds of people pressed around Jesus, demanding that He give them more miraculous proofs of His identity.

“Evil is reigning over your lives; you keep looking for yet another sign. Do you remember Jonah? He was sent to Nineveh to rebuke them for their wicked lives. I am to this generation what Jonah was to that city.

“Do you know about the Queen of Sheba? She went to great lengths just to hear Solomon’s wisdom. I am greater than Solomon yet you won’t listen to Me. The Queen will be a witness against you on Judgment Day, as will the people of Nineveh. At least they repented when they heard what Jonah had to say.

“I’m talking about the difference between living in darkness and living in the light. I’m speaking about how you view life. If you have good vision, seeing things as they really are, life is good. If your vision is blurred or blocked, everything gets complicated.  Stumbling around affects you and those around you. That’s why you must stay in the light!”

As if to give Jesus a chance to elaborate on these things, a Pharisee invited Him to dinner. The first thing the man observed (and was critical of) was Jesus’ failure to go through the thorough cleansing ritual before sitting down. Jesus knew He had raised some eyebrows so He explained, “Talk about the wrong way of looking at life! You Pharisees are obsessed with how things appear on the outside, oblivious to what’s wrong on the inside. It would be like taking this cup and washing the outside but leaving the inside full of scum and filth. Surely you don’t think the One who made you only focuses on external rituals and performance, do you?

“You’re meticulous about measuring out one-tenth of every tiny spice and herb to show how serious you are about tithing when all the while you completely miss the justice and love of God. I’m not saying you should be careless about your giving, but put first things first.

“The problem with you Pharisees is that you’re addicted to the recognition you get everywhere you go.

“Do you want to know what you are, you scribes and Pharisees? You’re just like unmarked graves covered with grass so that those who walk over the area have no idea what’s dead and rotting underneath.”

One of the religious experts said, “You’re being pretty hard on those guys and getting close to incriminating us as well.”

“Woe to you, too, you lawyers! You make up so many rules, which you yourselves don’t follow, that the

“Sure, you’re all about building fancy tombs for the prophets of old, but your own fathers were the ones who murdered them in the first place. That makes you accomplices in their wickedness. Do you want to know what God says? ‘I will send them prophets and apostles and some of them they will kill and persecute. Therefore I am going to hold this present generation accountable for all the innocent blood shed from Abel to Zecharaiah who was slain between the altar and the temple.’

“Yes, it’s you experts in the Law who have the key to truth, and you not only don’t use it for your own benefit but hide it so that no one else can enter in.”

As you might imagine, these comments ignited a firestorm of reaction among the scribes and Pharisees. They lit into Jesus with all kinds of questions and accusations, looking for some way to catch Him incriminating Himself.