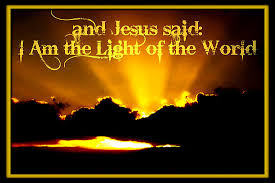 Turning to the crowd, Jesus said, “I am the light of the world. If you come with Me, you won’t stumble in darkness but will enjoy living in the light.”

The Pharisees in the crowd interrupted Him, charging, “You make all these claims for Yourself but all we have is Your word on it. We need more than that.”

So Jesus answered them, saying, “They may be My words but that doesn’t mean they are unreliable. I know I speak the truth because I know where I am from and where I’m going. You see things from your limited perspective, but I have the Father as My witness.”

“And where is this Father You speak of?” they asked.

Jesus answered them, saying, “It’s obvious that you don’t really know Me, otherwise you would automatically know who My Father is. One of these days I’ll be gone; you’ll look for me in vain and die in your sins. You can’t join Me where I’m going.”

Some said, “Is this guy going to kill Himself? Is that why He says we can’t follow Him or won’t be able to find Him?”

Jesus went on, saying, “You are from down here; I am from up above. You are part of this world system; I am not. That’s why I said that you will die in your sins: you refuse to believe in Me.

So they asked, “Who are You, anyway?”

He answered them, saying, “I am what I’ve been saying from the beginning. I could say a lot more, but I only say what the One who sent Me tells Me to say.” They still didn’t realize that He was talking about God, His Father. “Once you’ve nailed Me to a cross, you’ll find out Who I am. Then you’ll finally realize that I’ve been speaking for My Father and always do what He wants Me to do.”

There were some who believed in Him at this point.  To them He said, “Just keep holding on to what I have said; live by it and you will know that you’ve found truth for you will be truly free on the inside.”

Some others overheard Him and retorted, “What do You mean truly free? We’re Abraham’s descendants and we’ve never been enslaved to anyone.”

Jesus replied, “There are all kinds of slavery.  Everyone who sins becomes a slave to sinning.  A slave doesn’t have a permanent place in the family but the son does. So if the Son makes you free, you are truly free. I hear you claiming to be Abraham’s descendants yet you want to kill Me. You won’t listen to what I’m saying. I listen to My Father and you’re listening to your father.”

“Abraham is our father!” they shot back at Him.

“Come now,” Jesus said, “if you were really children of Abraham, you’d be more like him. Here I come telling you the truth about yourselves which I heard from God, and you’re ready to kill Me.  Abraham wouldn’t do anything like that. You’re behaving just like your father.”

“At least we weren’t born out of fornication,” they snapped, implying that He had been since there were rumors about His mother’s unplanned pregnancy and all. “We have one Father — God.”

“Well, that’s strange,” Jesus said. “If God were your father, you would love Me since I came directly from Him. But as it is, you can’t hear a word I’m saying because you are just like your father the devil; and you do everything he tells you to do. He was a murderer from the start and can’t stand truth. He is the father of lies and that’s his native tongue. Now, when I speak truth, you won’t listen and believe because these are God’s words; and you’re not of God at all.”

The Jews came back at Him again, saying, “We were right when we said You were a Samaritan and had a demon, weren’t we?” (For the rumor suggested that Mary got pregnant on her way through Samaria to visit her aunt Elizabeth in Judea.)

Jesus didn’t mince words. “I do not have a demon. I say that I am honoring My Father; you say I am not. There is One Who knows and we’ll let Him be the judge. I can promise you this, that anyone who takes Me at My word and lives by it will live and never die.”

“Well,” they responded, “there’s the proof that You’re out of Your mind. Abraham and the prophets are all dead, yet You’re promising that if people follow You they won’t die? That would make You greater than them. You’re not trying to tell us You’re greater than Abraham, are You? Or greater than the prophets?”

Jesus answered them, “It wouldn’t matter to you what I say about Myself. The only thing that does matter is what My Father says, the One you call your God. Well, I’m telling you that you don’t know God, but I know Him personally. I am committed to doing whatever He says. And speaking of Abraham, he was thrilled when he saw Me coming.”

“Right,” they said sarcastically. “You’re not even fifty years old and You want us to believe You’ve seen Abraham?”

Jesus answered, “The fact is, before Abraham was, I AM.”

Hearing that phrase from Jesus’ mouth threw them into a frenzy.  They looked for stones to kill Him on the spot. Jesus was able to walk right past them and out of the temple area.