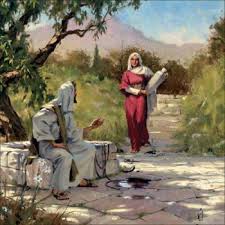 John was imprisoned for publicly exposing Herod’s many misconducts, which included adultery with his sister-in-law, Herodias.  When Jesus learned about John’s incarceration and also of the Pharisees’ awareness that His popularity was eclipsing that of John the Baptist, He left Judea to return to Galilee.

Ordinarily, Jews traveling between Judea and Galilee took the long way around, avoiding Samaria because they despised Samaritans. But leading His disciples north, Jesus explained that He needed to go through Samaria. Around noon they approached the city of Sychar, the site of Jacob’s well. This was an area bequeathed to Joseph by the patriarch Jacob.

Jesus was quite tired so He rested by the well while the disciples went into the city for some lunch. When a woman approached the well, Jesus asked her if she would give Him a cup of water. Knowing that Jews normally wouldn’t have any dealings with Samaritans, she asked Him, “How is it that You, a Jew, are willing to ask a Samaritan for a drink — and a woman, no less?”

Jesus said, “Ma’am, if you only knew what God wants to give you and Who it is you’re speaking with, you would be asking Me for a drink of living water!”

The woman didn’t know what to say to that. She couldn’t imagine what He was talking about. “Sir, I see that You don’t have anything to draw water with,” she said. “Where would You get this ‘living water’? Surely You’re not claiming to be greater than our forefather Jacob, who watered his flocks and drank from this well himself, are You?”

Jesus replied, “Everyone who drinks from this well will have to come back again and again, but whoever drinks of the water I give will never thirst again. The water will spring up inside him, bringing God’s kind of life.”

That sounded great to the woman. She told Him, “I’d like some of that water! That way I won’t have to keep coming out here to this well.”

Jesus’ response was rather unusual. He asked her to get her husband, to which she replied, “I don’t have a husband.”

Then Jesus told her, “You are right when you say you don’t have a husband right now. You have had five husbands, and you’re not married to the man with whom you’re currently living.”

No doubt embarrassed by the course of this conversation, she changed the subject. “Sir, you’re obviously a prophet with special insights. Our fathers have worshiped for generations on this mountain while the Jews say Jerusalem is the only proper place God has ordained for worship.” The question inferred was, “Who is right?”

Jesus used her diversion to announce the very essence of His Message. “Ma’am,” He said to her, “although the emphasis has for centuries been about where we worship, that’s about to change forever. The Jews do have an advantage because the Message explaining all this does come through their blood-line. However, regardless of heritage, God is looking for those who worship Him genuinely from the core of their being. God is spirit, you know, so what matters is whether we live authentically out of our spirits.”

Eager to end this conversation, as it was getting a little deep, she said, “I’m sure that when the promised Messiah comes, He’ll be able to explain all this.”

Jesus smiled and replied, “Here I am.” Before they could continue the discussion, the disciples returned from the town. It was obvious from the look on their faces that they were shocked to see their Master openly conversing with a Samaritan woman.

She took this interruption as an opportunity to hurry back to the city. She went immediately to some of the men and said, “You’ve got to come see this Man I met, Who, never having seen me before, told me everything I’ve ever done. Do you think He could be the Messiah?”

This piqued their curiosity and a crowd headed for the well. Meanwhile, Jesus’ disciples urged Him to join in their meal. “You go ahead,” He said, “I’m feeling pretty full right now Myself.” The disciples looked at each other, wondering if someone else had brought by some food. Jesus explained, “What satisfies Me most is doing the work the Father has assigned Me. Look around; the harvest is ready! Obviously I’m not talking about the physical fields of grain you can see — they won’t be ready for another four months. No, I’m talking about a spiritual crop that produces eternal life. Some have the task of planting the seeds; others get to reap the fruit. In this work others have been planting seeds for a long time, and you get to be part of their hard work by gathering the harvest.”

The disciples were about to see this come true. The crowd came out to meet Him and were so taken with His Message that they urged Him to stay on in Sychar. Jesus and His disciples stayed for two days. The testimony of the villagers was, “We first believed because of what You were able to tell this woman; but now, having heard for ourselves, we know that You are the Messiah, the One sent to save the world.”

Then Jesus, empowered by the Spirit, returned to Galilee. Many of the people had been to Jerusalem and news of His activities had spread quickly. He was welcomed in the region and He taught regularly in their synagogues.

One of the towns in Galilee was Cana where He had turned water into wine. An influential leader from Cana found Jesus and begged Him to come to his home to heal his son who lay at the point of death. Jesus rebuked him saying, “Why won’t you believe in Me unless I do a miracle?”

But the official persisted, “Sir, come quickly or he will surely die.”

To which Jesus stated simply, “You may return home; your son is healed.” The man took Jesus at His word and headed home.

Along the way, some of his servants ran to meet him and joyfully announced that his son was better. The man asked when the change had occurred, and they told him it had been around 1 p.m. The official realized that this was the very hour he had met with Jesus. Then he and his entire household believed in Jesus. So Jesus had now performed a second miracle in Galilee.

The next day Jesus decided to return to Galilee. He found Philip and invited him to come along. Philip was from Bethsaida, the same city as Andrew and Peter. He found his friend Nathanael and told him about Jesus, saying, “We’ve met the One whom Moses and the Prophets said would come — the Messiah! His name is Jesus.  He’s from Nazareth, son of a carpenter by the name of Joseph.”

Nathanael’s response was, “Can anything good come out of Nazareth?”

To which Philip said simply, “Come and see.”

As Nathanael approached, Jesus said to him, “Now here is an Israelite whose life is above reproach!”

Nathanael was taken aback. “How do You know me?”

Jesus told him that He’d seen him sitting under a fig tree before Philip had come up to him.

Nathanael was convinced. “Teacher, You are the Son of God, rightful king of Israel.”

Commending him, Jesus went on to say, “So you believe Who I am just because I said I saw you under the fig tree? You will most certainly see greater proofs in the days to come: the heavens opening and angels going back and forth between heaven and the Son of Man.”

A few days later Jesus and His disciples were invited to a wedding in Cana. Jesus’ mother also attended; and when she heard that the hosts had run out of wine for the feast, she approached her Son about the situation. He let her know that it may not be time for doing public miracles.

Nevertheless, in a few minutes He instructed the servants to fill six large stone water pots with water. No sooner had they filled them with water, than Jesus told them to take a cupful to the master of ceremonies.

The servants knew where the wine had come from, but the host had no idea. So he called to the bridegroom saying, “This is remarkable! At most celebrations they serve the good wine first and save the lower quality for later. Instead, you have saved the best for last!”

And so it was that Jesus demonstrated His unique power.  This was his first miracle. It increased the disciples’ faith in Him.

From there, Jesus, His family, and His disciples went to Capernaum for a few days and then made His way to Jerusalem for the Passover.

When He arrived at the temple, He saw the courtyard filled with animals and with people conducting business.  Jesus found some scraps of rope and wove them into a whip which He then used to drive all the animals out of the sacred space. He also dumped out the money boxes and declared loudly, “Get these things out of here! Do not turn My Father’s house into a public market!”

Needless to say, this caused quite a commotion. The disciples recalled the Scripture that says, “Zeal for the sacredness of Your House overwhelmed Me.”

Some of the leaders approached Jesus, asking, “Who gave You the right to do this? Give us some sign that You have this kind of authority.”

Jesus said cryptically, “Destroy this temple and three days later I’ll raise it back up.”

The Jews were incredulous, “We’ve been working on rebuilding this for forty-six years. How can You talk about doing it in just three days?”

Of course, He was referring to His body; but it wasn’t until three years later, after His resurrection, that the disciples put this all together and more fully believed what Jesus had told them.

The people were astonished at the reports of His miraculous powers, and many believed what had been claimed about Him; but Jesus didn’t put too much stock in their support, knowing how fickle people can be.