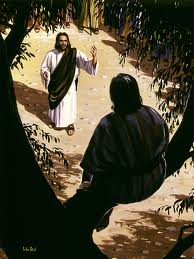 Their journey toward Jerusalem took them through the old city of Jericho. Two blind men were sitting along the road and heard the crowd approaching. One of them, named Bartimaeus, asked what all the commotion was about.  Someone told him that Jesus of Nazareth was passing through town. Immediately, the men began to shout out, “Jesus, Son of David, have mercy on us!” Over and over they repeated this until some tried to silence them. This only made the blind men more desperate and they cried out even louder, “Have mercy on us, O Lord, Son of David! Have mercy on us!”

Jesus heard them and instructed that they be brought to Him. So some in the crowd hurried to the two men and said, “C’mon, hurry, the Master is asking for you!” They threw off their blankets and made their way through the crowd to where Jesus was.

He asked them, “What would you like Me to do for you?”

“Teacher, I want to see!” said one of them. “Lord, open our eyes!” replied the other.

Filled with compassion for them, Jesus reached out and touched their eyes, saying, “Receive your sight! Go on your way now. Your faith has made you well.”

They couldn’t believe their eyes! They were seeing! They praised God — as did the whole crowd— and began following Jesus.

Just a little further down the road, Jesus came to a place where a large sycamore tree stood. Looking up, He saw a grown man sitting on one of the branches. A local tax-collector, in fact the head of tax-collecting in Jericho, had heard that Jesus was coming; and he was anxious to see for himself the man everyone was talking about.

This man, Zaccheus was his name, had a disadvantage; he was rather short in stature and couldn’t see much when crowds were around. That’s why he had climbed up the tree, to get a better view. To his surprise, as Jesus approached the tree, He stopped, looked up, and spoke to him by name, “Zaccheus, come down here, I’d like to get to know you!” Zaccheus dropped down out of the tree and invited Him to his home.

Now tax-collectors were despised by everyone because it was common practice for them to overcharge citizens, keeping the surplus and enjoying a life of luxury themselves. Needless to say, they didn’t have a lot of friends. When the crowd saw Jesus heading home with him, they were appalled that He would keep company with sinners like this.

Zaccheus, however, was deeply touched by Jesus’ genuine interest in him.  Suddenly, as if he had been blind, he saw what was of real value. “Lord, I’m going to see to it that half of my estate gets sold and the proceeds distributed to the needy in this town,” Zaccheus declared.  “And besides that, if I’ve overcharged anyone, I commit to repay them four times the amount I took.”

Blessed by this change of heart, Jesus said, “Today salvation has come to this house. Zaccheus has shown himself to be a true son of Abraham by this decision. The whole reason I came was to seek out lost ones like him and rescue them.”

Because His followers were assuming that He was getting ready to set up His Kingdom on earth, Jesus told this story as they continued toward Jerusalem.

“A certain prince was called away to conduct kingdom business, so he commissioned ten of his servants to oversee some of his investments. He gave each of them a pound of silver to manage.

“It so happened, while the prince was away, that the citizens, who hated him, sent a delegation to let him know that they didn’t want him ruling over them any longer.

“In time, the prince returned and called in the ten servants to account for their business dealings. The first to show up had multiplied the value ten times what he’d been given. ‘Great job,’ the prince remarked, ‘you’ve proven yourself faithful; I’m putting you in charge of ten whole cities!’

“The second servant had been able to increase the investment by five pounds of silver, and the prince rewarded him with control over five cities.

“The next servant appeared carrying a small handkerchief and explained, “Sir, here is the pound of silver you left with me. I was too afraid of what you would do if I lost it, and I didn’t want to take any risks.”

“‘Why, you worthless fool!” the prince exclaimed.  ‘If you knew I was a shrewd investor so you could have at least put it in the bank to get a little interest!’ Then, turning to the others, he said, ‘Take this man’s silver and give it to the first one who earned ten pounds with his.’ They wondered why he would give it to the one who had so much already.

“‘Let me assure you,’ the prince concluded, ‘that everyone who has used what I have given them will be given more, and any who have nothing to show for their lives will lose everything. And as for those citizens who sent word that they didn’t want me ruling over them, bring them here and kill every one of them.’”

When He had finished the story, Jesus continued up to Jerusalem.

Passover was approaching. Days in advance many Jews from outlying areas converged on Jerusalem to complete the purification rituals. Everyone was talking about Jesus, wondering whether He would have the nerve to make a public appearance.

The chief priests and Pharisees had issued an edict requiring anyone who knew of Jesus’ whereabouts to report to them so they could arrest Him.