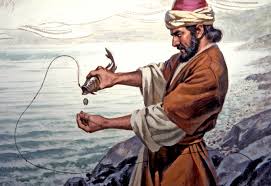 The day after their mountaintop experience, Jesus found a crowd gathered around His disciples.  They were arguing with the Jewish scribes. Of course, when the people noticed, Jesus they all ran to Him. Jesus asked the scribes what they had been discussing; but before they could answer, a man burst from the crowd and cried out, “Lord, have mercy on my son. He has seizures and the devil throws him into convulsions. Sometimes he foams at the mouth, gritting his teeth; and sometimes he falls into a fire or into the water. I took him to Your disciples for healing, but they couldn’t cure him.”

“Oh, you poor, lost people,” Jesus said. “How much longer can this go on? Go, get your son and bring him to Me.”

The instant the boy saw Jesus, the demon-spirit threw the child to the ground in convulsions and he began foaming at the mouth. Jesus asked the boy’s father how long he had been having this trouble.

“Ever since he was a young child, Sir,” he replied. “If there’s anything You can do for him, please do!”

Jesus said, “If you trust Me, anything is possible.”

To which the man answered, “Oh, I believe in You, help me overcome any unbelief!”

Jesus went to the boy and addressed the evil spirit, saying, “Deaf and mute spirit, I command you to leave him and never return.” With a shriek and a final convulsion the demon came out of him, and the boy lay limp on the ground. The people thought he had died; but Jesus took him by the hand and lifted him up, handing him to his father.  Everyone was amazed at how powerfully God had worked.

Later, when they were alone, the disciples asked Jesus why they had been unable to heal the boy. “Some cases require that you have a stronger faith. This is something you develop over time through prayer and fasting. Eventually, if the situation called for it, you would be able to tell that hill to move over to the other side of the valley.  Nothing would be impossible.”

They continued ministering around Galilee, but Jesus tried to avoid the crowds. When He was alone with His disciples He reminded them that He was going to be betrayed, turned over to men who would kill Him, but that He would then be raised up on the third day.

Naturally, they were very upset by this and couldn’t comprehend it, but they were too afraid to ask Jesus to explain further.

One day in Capernaum a tax-collector for the temple found Peter and asked him whether Jesus paid the temple tax. “Of course,” Peter told him.

But later, when they were in the house discussing the situation. Jesus said, “Simon, when a king decides to collect taxes for some project, do his own subjects have to pay taxes or does he collect it from foreigners?”

Peter quickly said, “Only from the foreigners.”

Jesus went on, “So the local citizens don’t have to pay, right? Technically, we shouldn’t have to pay the temple tax; but to avoid causing a scene, we’ll pay it anyway. I’ll tell you what, take your fishing rod down to the lake and catch something. The first one you catch will have a coin in its mouth that will be enough to cover the taxes for both of us.”