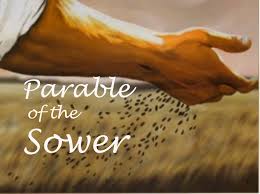 Later that day He left the house and the crowd followed Him down to the lake. He ended up getting into a boat and teaching from there. He told another story.

“A farmer went out to plant his fields. As he scattered the seeds, some fell on the path and the birds had a feast. Some fell on areas where there wasn’t much top-soil. The seed sprouted but didn’t keep growing because it had no roots and the sun dried it out. A few seeds fell in areas where weed seeds had also fallen; and when they all sprouted, the thorns choked the good plants. Thankfully, some ended up on the good soil, sprouted, and produced a crop that was thirty, sixty, and even a hundred times what was planted.”

Later, when He was alone with His disciples, they asked what point He was trying to make with the story about the farmer and why He taught using stories.

“God has given you the tremendous privilege of learning the mysteries of His Kingdom. Not everyone shares that blessing. You have responded well to what you’ve heard so far and more will be revealed. The rest, who have listened but not really heard, watched but not really seen, will really lose out. It’s exactly what Isaiah predicted, ‘Hearing, you will hear and not understand; and seeing, you will see and not perceive; for the heart of this people has grown dull. Their ears are hard of hearing, and their eyes they have closed, lest they should see with their eyes and hear with their ears, lest they should understand with their heart and turn, so that I should heal them.’

“But as I said, you are getting in on a blessing which for centuries prophets and godly men longed to see and hear. Now, do I really need to explain this parable of the seeds to you? It really is so basic. You need to understand this one before you can possibly interpret any others.

“The seed is God’s Word, His Message. The hard-packed path is a picture of those who fall under the sound of the truth but won’t receive it at all. Immediately the devil, like a hungry bird, comes and removes the very idea from their heart, eliminating all possibility of future life.

“Those represented by the stony ground seem truly glad to hear the good news and they respond positively at first. But as soon as they encounter opposition or ridicule, they give it up and the possibility of good fruit is lost.

“Then there are those who, likewise, are happy to attend the meetings and be around the Message; but once they get home and life gets busy, they fall back into the multitudinous distractions and temptations of this world.  Their so-called ‘belief’ ends up being unfruitful.

“And then there’s you:  the good soil. Your hearts are hungry for truth and you receive it, apply it to your lives, let it change you from the inside out, and, in the end, watch it reproduce in countless benefits to you and others.

“My message is like a lamp to help people find their way. But light, to be useful, has to be out in the open. It is so important that you let it expose the secrets of your heart rather than hiding your true self in darkness. Ultimately, every secret will be out in the open, so why not take advantage of this opportunity to be changed? If you do, you will see and hear more and more. If you shut out the light, you’ll end up in utter darkness.

“And don’t ask Me how this process of transformation works. No farmer would have a harvest if they went out and kept digging up the seed to see what was happening to it. He leaves it alone and the miracle happens; the dirt and sun and rain do the work. Before long a green shoot appears, then the head forms, and finally the ripe grain is ready for harvest. That’s when the farmer goes to work!

“Since we’re talking about seeds and harvest, here’s another story. Once a farmer planted his crops and returned home to await the harvest. What he didn’t know was that an enemy sneeked in at night and threw seeds of worthless weeds all over the field. Once the plants were up and growing, the farm-help noticed the different kinds of leaves and asked the farmer how it happened that there were so many weeds mixed in. He recognized the dirty work of an enemy but warned them not to attempt to pull the weeds, saying, ‘If you did that now, you’d pull up the good plants, too. We’ll have to separate the wheat from the weeds at harvest time.’

“The mustard seed is another example of how the Kingdom works. It’s incredibly tiny and doesn’t seem like much when you plant it; but once it starts growing, it gets so large and strong that birds can build their nests among its branches.

“Ladies, here’s one for you: the Kingdom message is like yeast. It takes very little to affect a large batch of dough, doesn’t it?”

Even this story-telling aspect of Jesus’ ministry had been predicted in the Old Testament. There’s a verse that says, “I will open My mouth in parables; I will utter things which have been kept secret from the foundation of the world.”

Later, Jesus’ disciples asked Him to explain this last story. He said, “In this story, I am the farmer planting the good seed. The field is the world, the good seeds are all who belong to the Kingdom, and the weeds are Satan’s ‘children.’ The enemy, of course, is Satan. The harvest is the final judgment when time comes to an end, and my angels are the ones who bring in the harvest.

“In the same way that farmers around here separate out the worthless stalks and burn them, I will send out my angels to gather up those who persist in rebellion and wickedness. I will see that they are thrown into the furnace where there will be unbearable regret as they reap what they have sown. Meanwhile, the ones who have learned Kingdom ways will shine like the sun in their Father’s Kingdom.

“Are you getting the message? Do you see the importance of the Kingdom? It’s like a treasure that was buried in a field. When a man discovered it, he perceived the extravagant value.  Then he went and sold everything he owned so he could buy the field and have that treasure. Or maybe it’s more like an unusual pearl in a merchant’s bucket. Someone who knew about pearls saw it and sold everything he had in order to buy it.

“Spreading the Kingdom message is like fishing with a big net. The net is put in the water and dragged back to shore. Once there, they get to work saving the good fish and throwing out the useless ones. Judgment Day will be like that when My angels separate the good from the bad. Again, it won’t be a good time for the wicked. They’ll realize after it’s too late that they didn’t get away with their sinful lives.

“Does this make sense to you?” Jesus asked.

“And so it is,” Jesus went on, “that everyone who studies the Kingdom of Heaven is like a homeowner who skillfully utilizes fresh new things as well as familiar old ones.”