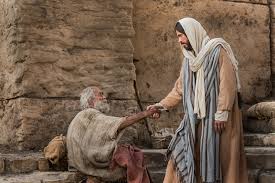 The first thing that happened as Jesus and the crowd came toward the town was an encounter with a leper. The man knelt in front of Jesus and said, “Sir, I know You could heal me if You wanted to.”

Jesus laid His hand on the man’s head and said, “Of course I want to. Be clean!” The man’s disease disappeared. Nothing like this had ever happened before, so Jesus instructed him to go to the priest and follow the instructions Moses had prescribed. Jesus knew that this would be startling evidence to the priests. “Oh, and don’t say anything to anyone before you do this,” Jesus told him.

Instead, the man went all over the region spreading his good news. As a result the crowds became so huge that Jesus could rarely go into the cities. He had to stay out in the rural areas, and the people came to Him for healing. Jesus often escaped to the desert to pray.

One day a Roman centurion who lived in Capernaum heard that Jesus was nearby. He sent some of the influential Jewish leaders to appeal to Him for help; his servant was paralyzed and desperately ill. They approached Jesus explaining that, even though this was a Roman soldier, he had been very helpful in the community, having built them a synagogue, and was worthy of Jesus’ attention.

Jesus was more than willing to help, so He went with them. He wasn’t far from the house when the centurion sent some friends to convey a message. “Sir,” they explained, “our friend, the centurion, wants You to know that he’s not important enough for You to come into his home or even to personally approach You. He said to tell You that he knows if You would just give the command, his servant would recover. You see, he’s very familiar with how authority works. He’s got men under him who instantly do whatever he tells them to, and he knows You have the authority to do this.”

When Jesus heard this, He was amazed. “This man gets it,” He said to the crowd, “and he’s a Gentile! Take note! When I sit down in the Kingdom of heaven to feast with Abraham, Isaac and Jacob, there’ll be a lot of folks there who aren’t Jewish, while many who ought to have understood who I am will be banished to outer darkness and filled with regret.”

Having issued that warning, Jesus told the friends that when they went back, they would find that what the centurion believed could happen did happen. Yes, the servant, as it turns out, had been healed at the very moment Jesus said that.

Some days later when Jesus was at home in Capernaum, a crowd gathered. Soon there were so many in and around the place that no one else could possibly get to Him. Among those who were present were many Pharisees and teachers of the Law from nearby towns and from as far away as Jerusalem. Again, Jesus displayed His power and many were being healed.

It so happened that some men whose friend was paralyzed brought him to see Jesus, carrying him on a stretcher; but because of the crowd, they couldn’t get in. That didn’t stop them. Since the houses had flat roofs with stairs leading up, they took their friend onto the roof and proceeded to remove some of the ceiling tiles. Once they had a large enough opening, they lowered their friend on his stretcher right in front of Jesus. Amazed at the determination and faith of the friends, Jesus looked at the paralytic and said, “This is your day, son, your sins are forgiven!”

That wasn’t what anyone was expecting to hear, and the scribes were thinking to themselves, “That’s blasphemy! Only God can forgive sins.”

Jesus perceived by the Spirit what they were thinking, so He rebuked them, saying, “Why are you thinking that? Is it easier to say, ‘Your sins are forgiven’ or ‘Get up and walk’? To show that the Son of Man has authority to forgive sins, I’ll now tell him to get up and walk.”

“Rise up,” Jesus commanded. “Take your bedding and be on your way.”

Immediately the man got up.  He was overjoyed, the crowd was awestruck, and all were thanking God for imparting such power to this unusual Man.

Later on, Jesus left the house and was heading down to the sea with the massive crowd at His heels. Along the way He saw a man named Levi (also called Matthew) sitting at his desk in the tax-collector’s office. Jesus invited him to come along as one of His disciples. Matthew jumped to his feet, left his books, and followed Him.

Not long afterward, Matthew hosted a great party at his estate for his friends and fellow tax-collectors (not the most respected folk in the community) to meet Jesus.

The Pharisees apparently weren’t invited, but they heard about it and confronted some of His disciples, asking, “Does your Master know the kind of people He’s eating with?”

Jesus overheard the question and retorted with this question: “Now, who goes to see the doctor — the healthy or the sick? I didn’t come to help the people who think they’re just fine; I’m here for those who know they need My help. You should go back and study the phrase ‘I desire mercy and not sacrifice’ until you understand what God meant by it.”

Later some of John’s disciples and orthodox Jews asked Jesus why He and His disciples seemed to spend more time feasting than fasting. Jesus explained using the analogy of a wedding. “Surely you wouldn’t expect the wedding guests to fast when the bridegroom is with them. A time will come — after the bridegroom leaves — when there’ll be plenty of time to fast.

He went on to illustrate that their problem lay in trying to fit His Message into their religious system. He gave the example of patching torn clothing, saying, “A tailor knows better than to patch with unshrunken material. If he did, the first time it got laundered the material would shrink and make the tear even bigger.” He gave them another example of a vintner making good wine. “If he put new wine into weathered, used containers, they’d burst as the wine aged. That’s why they always use new wineskins when making wine. Your problem is that you’re satisfied with the old and don’t want the ‘new wine’ I’m offering.”

Sometime later during one of the feasts, Jesus went back to Jerusalem. Near one of the city gates called the Sheep Gate was a public pool that had five levels of deck surrounding it. There was a legend that from time to time an angel would “stir the waters,” and whoever got to the water first was healed. Jesus saw a man lying there who had obviously been there for a long time; he’d been disabled for thirty-eight years. So He asked the man, “Would you like to be healed?”

Rather than answering directly, the man explained that he couldn’t be healed because someone else always beat him to the water when it was stirred. Jesus said, “Just get up and take your bedroll home.” The man stood to his feet, rolled up his mat and began making his way home.

You’d think everyone would be thrilled, but there was a problem. Some orthodox Jews saw the man and confronted him. “Don’t you know it’s the Sabbath? You shouldn’t be doing work like carrying your bedding.” The man explained that he’d just been healed, and whoever healed him had told him to take his bedroll home.

“Who told you that?” they demanded. But the man had no idea who Jesus was; He had disappeared into the crowd by then.

Later that day Jesus found him in the temple and warned him, “Now that you’ve been healed, be careful not to make wrong choices again, lest something worse happen to you.”

The next time the man saw the legalistic Jews, he told them that it had been Jesus who healed him. This infuriated them, and they looked for a way to kill Him because He was desecrating the Sabbath. To make matters worse, Jesus told the crowds, “My Father is the One doing this work through Me — even though it’s the Sabbath.” So now, on top of Sabbath-breaking, Jesus was claiming to be equal with God, like a son with his father. That was blasphemy in their minds.

Jesus didn’t shy away from the subject. He went on at length explaining His relationship with the Father. “The truth is I don’t do anything out of my own initiative. My Father loves me and shows Me what He’s doing, and I work alongside Him. He plans to do even greater things that are sure to amaze you:  the Father can raise the dead and I, likewise, give life to the dead. The fact is that the Father has turned over the judgment of mankind to Me. If you won’t honor Me for Who I am, then it reveals that you aren’t honoring the Father who sent Me.

“Speaking of judgment, whoever takes Me at My word and embraces My Message as being God’s truth has already escaped death and judgment and has begun really living. This isn’t some future resurrection I’m describing; it’s for anyone here and now who will listen to Me. The Father and I have this life in Us, and We can give it to whomever We choose.

“Yes, there will be a future resurrection and some will enter eternity with Our life in them, while others will face an eternity of separation from Us. I’m not making this up. The Father has established this and I am speaking for Him. My life isn’t about doing the things I want to do but always pursuing the desires My Father has.

“You may not feel that you can take My word about this, but I have witnesses that I speak the truth. John the Baptist testified about Me and you respected his ministry (at least for a while), but I have a far greater witness:  the miracles I’ve already done. They are proof that God is working through Me. Yes, the Father who sent Me here has also testified about Me.

“Unfortunately, you wouldn’t be able to recognize His voice. The way you’re responding to Me shows that you don’t have a clue what He’s saying even though you study the Scriptures diligently. You think that the more you learn about God the better off you are; when the truth of the matter is that all those Scriptures point to Me, and you won’t come to Me for life.

“I don’t need approval from you. I’ve seen your circles of approval; it’s more important to you to get men’s praise than to be honored by God. You clearly haven’t experienced the love of God for yourselves. And don’t tell Me you’re Moses’ disciples. Everything Moses wrote pointed to Me, so you really don’t believe his words or you’d be receiving Mine.”