You are about to embark on the adventure of a lifetime!  Just imagine you were living back in the First Century, going about your daily business, when a new Teacher came through town looking for disciples.  What are the chances you would drop everything and spend the next three years of your life traipsing around the country with Him?  When a couple of guys asked Jesus what He was up to He simply said, “Come and see!”  They did.  Their lives were changed forever.

I’m inviting you to walk with me through the Story of Jesus for the next forty days (Lent Season.)  Each day’s reading should only take 10-15 minutes.  By the time we reach the climax of the story (Jesus’ Passion Week) you will have read everything contained in the four Gospels of the New Testament.  That’s right, every story, every conversation, every miracle recorded in Matthew, Mark, Luke, and John has been woven together into one story –just the way He lived it.

After we finish this part of it we’ll keep going through Books II and III of the “Trilogy” which cover the New Testament books of Acts and Revelation.  When we’re done (about 2 ½ months from now) you will have a very different perspective on who Jesus is and, like His first disciples, something about your life will have radically changed. 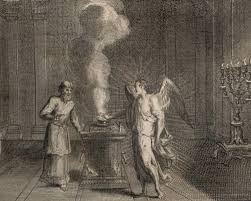 Many have already written about the life of Jesus Christ. Relying on eye-witnesses and reputable sources, this record is offered to you as an orderly account of the events as they occurred.

In the beginning God spoke. He expressed who He was using words. We begin our story with The Word. Mysteriously, this “Word” was with God, and in fact, was God. We are told that this “Word” created everything that exists, so we recognize Him as the Source of all LIFE. That LIFE is light-filled. It can diffuse the darkness (ignorance) that permeates our world.

Even more mysterious is the fact that this God-Word became a human child and grew up and lived right here in our neighborhoods. This light-source shone on the world He’d made, but the darkened human race didn’t recognize Him. But whoever did take hold of Him was given the gift of a life-time: a new identity as one of God’s own children, not based on their credentials or efforts but just because that’s what God desired for them.

John, the one who baptized, came on the scene before Jesus went public. He prepared the way by announcing Jesus’ arrival and encouraging everyone to “see the light” of Who He was. John was quick to acknowledge that he himself was not the Light, but that Someone was coming who had existed long before John had been born. (More will be said shortly about John’s miracle birth.) In his introduction, John made it clear that although no human had ever seen God, Jesus had; and, coming from the heart of the Godhead, Jesus would make it possible for mankind get to know God. John also hinted at the major shift in how humans would relate to God. “This Jesus,” he declared, “was not bringing laws like Moses did. He was bringing something called grace.” Grace and truth would be the hallmarks of Jesus’ message.

In case some might mistake Jesus, the God-man, for an alien or think of Him as other-than-human, we have the genealogies of His mother, Mary, as well as His earthly (not biological, but that will be explained in a few pages, too) father, showing that He can trace His human blood-line through King David, the Patriarchs, and all the way back to Adam.

During the reign of Herod over Judea, the Jewish temple duties were handled by a rotation of authorized priests. Among the duties was the burning of incense in the Holy Place day after day. Our story begins when this routine was interrupted by a supernatural visitor who startled a priest named Zacharias. Zacharias and his wife Elizabeth were up in years and had prayed in vain for a child, an heir, which was so important in their culture. They had lived as faithful God-followers even though their prayers had gone unanswered.

So on this day when it was Zacharias’ turn to do the temple chores, he was working inside the sacred room, putting the daily incense on the altar.  Suddenly an angel was standing in front of him beside the altar. Naturally, he was struck with fear, which the angel perceived. “Nothing to be afraid of, Zacharias. I’m here to tell you that your many prayers have been heard; and your dear wife, Elizabeth, will become pregnant.  You are going to have a son!”

The angel went on to explain that his name would be John; he would have a special assignment, some dietary restrictions, and the tremendous privilege of preparing the entrance of the long-awaited Messiah. He also noted that this miracle baby would experience the infusion of God’s Spirit even while in the womb. “He will turn many of Israel’s children toward the Lord their God,” he went on to say, “and in the spirit and power of Elijah he will turn the hearts of fathers to their children and cause rebels to listen to the wisdom of those who are godly.”

I’m sure you can appreciate Zacharias’ skepticism, knowing that both he and his wife were way beyond child-bearing years. He asked, rather doubtfully, how this could possibly happen.

Now, the angel Gabriel wasn’t used to anyone questioning his word, especially when he knew it had been given him by the Sovereign Ruler of the universe. You can almost hear the edge in his voice as he answers, “I am Gabriel who stands in the very presence of God Almighty! He sent me with this exciting news; but since you doubt my words, I’m going to strike your tongue so that from this hour until all this takes place you won’t be able to say a word.”

Meanwhile, the crowd outside was wondering why Zacharias’ routine tasks were taking so long. As he emerged and they saw that he couldn’t speak, they realized through his gestures that something out of the ordinary had taken place. Once his term of service was completed, Zacharias returned home to Elizabeth. And she conceived. For the next five months she stayed out of the public eye, astonished that the Lord had “looked on her” in this special way.